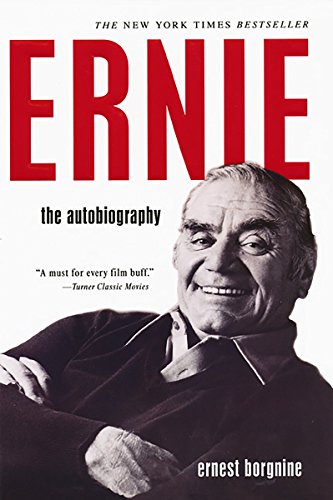 We wept at his Oscar-winning role in Marty. . .we gasped when he took on Frank Sinatra in From Here to Eternity. . .we were riveted by his compelling performances in The Dirty Dozen, Bad Day at Black Rock, and Ice Station Zebra. . .and we laughed at his television sitcom McHale’s Navy. We loved all of Ernest Borgnine’s many portrayals, but what did we know about the man behind the famous roles? Now for the first time, he tells us in his own words the fascinating story of his life in this witty, candid, and revealing memoir.

For more than fifty years, Ernest–or “Ernie” as he’s known to his friends–has been one of the most recognized, celebrated stars in Hollywood as well as a respected, talented actor, and a living legend. Stretching from his childhood as the son of Italian immigrants to a spectacular career that is still thriving in his 91st year, from the early days of live TV to the voiceovers for The Simpsons and SpongeBob SquarePants, Ernie tells of the trials and tribulations on his road to fame, the friendships he shared with some of the silver screen’s biggest stars, and the glamorous leading ladies he loved.

Acclaimed for his ability to play sensitive and tough-guy roles equally well, he was also famous for squaring off against some of Hollywood’s most formidable actresses–including Bette Davis in A Catered Affair and Joan Crawford in Johnny Guitar. Recalling his experiences starring in classic movies such as The Poseidon Adventure, The Wild Bunch, and Escape from New York, he reveals personal insights and irresistible stories about cinema’s greatest icons–including Spencer Tracy, James Stewart, Kirk Douglas, Montgomery Clift, Gary Cooper, Janet Leigh, Raquel Welch, Gene Hackman, Rock Hudson, Sammy Davis, Jr., Tony Curtis, Alan Ladd, Glenn Ford, and Burt Lancaster. And with characteristic frankness, he also talks about his off-screen loves and passions.

A must for every film buff, Ernie: An Autobiography is a fascinating memoir–filled with secrets, well-remembered details, and never-before-told stories–of a star who has thrived in the changing world of Hollywood for more than half a century, and endeared himself to legions of fans everywhere.

“(Borgnine’s) anecdotes are gleefully self-deprecating. . .he comes off as the kind of guy you’d like to have a beer with.” —NY Post

“With astute observations on the Hollywood hierarchy and tales about everyone from Lee Marvin and Steve McQueen to Bette Davis and Kim Novak, (Borgnine) writes with an unassuming, no-nonsense tone. His love of filmmaking and his respect for his fellow actors permeates the pages of this engaging and satisfying memoir.” —Publishers Weekly

“. . .a satisfying detailed account of a decades-long career that also included memorable roles in durable blockbusters like The Wild Bunch and The Poseidon Adventure. He comes across as an unspoiled, nice guy who enjoyed his success. . .One of the finest unghosted Hollywood autobiographies.” –ALA Booklist

“A super read. . .Ernie: The Autobiography by Ernest Borgnine is as nifty as he is.” –Cindy Adams, NY Post